General insurance premium set to go up from April 1

NEW DELHI: Car, motorcycle and health insurance will cost more from April 1 with regulator IRDAI giving go-ahead to insurers for revision in commission for agents.

The change in premium after modification will be limited to +/- 5 per cent of the existing rates.

The increase will be in addition to the enhanced third party motor insurance rates, which too will come into effect from April.

The IRDAI (Payment of Commission or Remuneration or Reward to Insurance Agents and Insurance Intermediaries) Regulations, 2016 comes into effect from April 1, 2017.

The regulations, the regulator said, bring about certain revisions in commission/ remuneration rates and also introduce the reward system.

These may trigger insurers to revisit the pricing of their products in so far as the costing input relating to commission or remuneration is concerned, said the Insurance Regulatory and Development Authority of India (IRDAI).

However, the change in premium due to the new regulations should be "limited to +/- 5 per cent of the existing premium rates of products/add-ons", it said.

Further, insurers will have to give a certificate that there is "no detrimental change" in premium rates or any other provision of policies already sold.

Car goes up in flames in Pondicherry 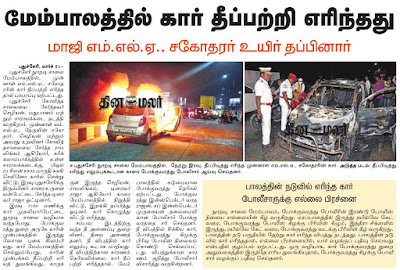 Car goes up in flames 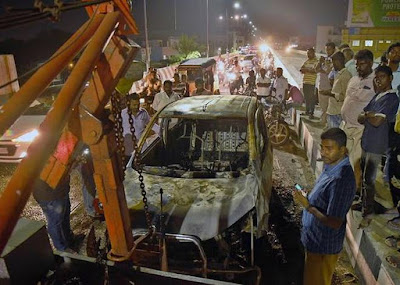 Providential escape:The car that went up in flames on 100 Feet Road on Tuesday.T.Singaravelou

Three persons had a providential escape after the car in which they were travelling went up in flames on the flyover on 100 Feet Road here on Tuesday evening.

According to the police, Chezhiyan, brother of former AINRC MLA G. Nehru, his friend Ramalingam and car driver Raja, all hailing from Orleanpet, were returning from Karikalambakkam.

Around 7 p.m., Raja noticed smoke emanating from the engine and stopped the car.

They quickly got out of the car when fire engulfed the vehicle. Fire and Rescue Services personnel put out the fire and towed away the vehicle. Police suspect a short-circuit to be the reason behind the fire. Further investigations are on.

Email ThisBlogThis!Share to TwitterShare to FacebookShare to Pinterest
Labels: Car goes up in flames, Fire, Pondicherry 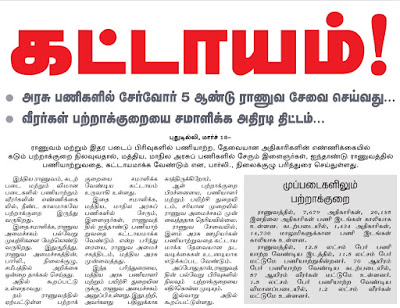 The central government alone has about 30 lakh employees with the Indian Railways, while the state governments employ about another two crore people.

Compulsory military service for those who want a subsequent employment with the government is being considered by the Department of Personnel and Training (DoPT)- a wing of government that reports to the Prime Minister. The wing is tasked with administering and making policy for all government servants.

The proposal to make military service compulsory for future government servants was moved by the Ministry of Defence as an emergency measure to fill the shortfall in the armed forces.

Compulsory military service for aspirants of government employment has been recommended by the Parliamentary Standing Committee.

The Committee while recommending five years compulsory military service to such aspirants wanting directly to join central and state government gazetted services have taken into account the fact that there are perennial and alarming shortages of officers and men in the Armed Forces, which needs to correct, a recently tabled report of the Parliamentary Standing Committee observed. 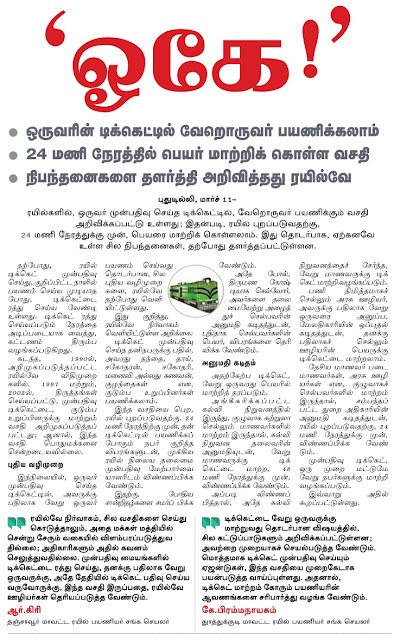 LUCKNOW: You might have planned a rail journey months in advance, but have to cancel it at the last minute owing to some unavoidable circumstances. While you can't go, you could be willing to send someone else on your behalf. But, re-planning a train travel is often a spoiler. Most passengers drop the idea for getting a new reservation done.

Though not many know, there's a way out. A passenger can allow other person to undertake a journey on the same ticket by seeking railway's permission. While this saves the passenger from the cancellation procedure, the person travelling on the passenger's behalf does not face the peril of travelling on an unconfirmed ticket.

Though railways does not allow transfer of tickets and it's only the passenger, under whose name the ticket/berth is booked, can travel on a reserved ticket, there are circumstances where the ticket can be transferred to close family members of the passenger like parents, siblings, sons and daughters and spouses. The passenger has to request the chief reservation officer to change the name of the passenger on the ticket 24 hours before the journey time.

The age-old rules of railways are meant to make train travel easier for passengers, but it's the little understanding of the rules that leaves the purpose unmet. The reservation officers at the station mention several such rules which are little known. "At times, we tell people coming to us about these provisions," said a station officer. The number of passengers who avail this facility is very low, barely 5-10%.

Tickets can also be transferred in case of government employees travelling on an official visit. The other employee can undertake a journey, instead of the one for whom the ticket was initially booked, provided the railway gives permission. The request has to be made 24 hours before the journey.

The students of recognised colleges or educational institutions are also beneficiaries of the rule. The ticket can be transferred to the intended student, if the head of the institution writes to the concerned railway officer, 48 hours before the train journey.

The same can be availed by a person who booked a ticket to attend a wedding. The person can send someone else on his behalf, if the request is made 48 hours before the train departs. Such request, however, will be considered only once.

You can transfer your train ticket to someone else, here is how

Indian Railways have further said that such request will be granted only once. However, in case of students, marriage party and NCC cadets, such request for change in excess of 10 per cent of the total strength of group shall not be granted.

Indian railways, train ticket transfer, railway administration, rail reforms, railway news, indian railway passengers, rail enquiry An Indian Railway ticketing staff in Allahabad. If the passengers are members of a marriage party, then any person deemed to be head of the group can make a written request 48 hours before the scheduled departure of the train. (AP/File)

If you are holding a confirmed reservation ticket and for some reasons you cannot travel or have a change in plans, you can transfer it to another person or your family member. Here is a guideline released by the Indian Railways, world’s fourth largest railway network, to avail this facility:

“Chief Reservation Supervisor of important stations are authorised by Railway Administration to permit the change of name of a passenger having a seat or berth reserved in his name,” says a statement released by the Indian railways.

If the passenger is a government servant, proceeding on duty, he/she can make written request 24 hours before the scheduled departure of trains. The name on the ticket will be changed to another person’s name for whom the ticket transfer is sought.

A passenger can also transfer his confirmed ticket to another member of his family, meaning, father, mother, brother, sister, son, daughter, husband and wife. He/she just needs to make a request in writing 24 hours before the scheduled departure of the train.

Another condition applies where the passengers are students of a recognised educational institute. In such a case, the head of the institution can make a written request 48 hours before the scheduled departure. The reservation made in the name of any student can be transferred to any other student of the same institute.

If the passengers are members of a marriage party, then any person deemed to be head of the group can make a written request 48 hours before the scheduled departure of the train. The reservation made in the name of any member of the marriage party can be transferred to any other person, in this way.

The facility can also be availed by a group of cadets of National Cadet Corps who have confirmed reservation ticket/tickets but need to transfer it/them to any other cadet. Any officer, who is head of such a group, can make a written request 24 hours before the train’s departure.

Indian Railways has further said that such request will be granted only once. However, in case of students, marriage party and NCC cadets, such request for change in excess of 10 per cent of the total strength of group shall not be granted.