​Three from Bengaluru drown in sea 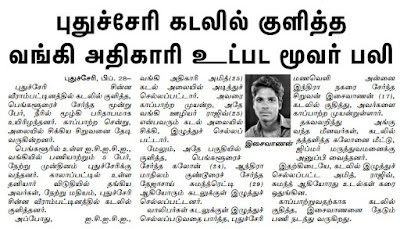 Three from Bengaluru drown in sea

Three youths from Bengaluru drowned in the Chinna Veerampattinam beach near here on Saturday. One of their friends was rescued while a local youth who attempted to save them went missing.

The police have launched a search operation to trace him. The incident occurred at around 4 p.m.

Police said Amit (25) and Rajeev (25), employees of ICICI bank, Sumath (24), an IT professional and Kallon (25) all hailing from Bengaluru were part of two groups.

The two groups visited Chinna Veerampattinam beach on Saturday. Four of them were in the waters when they were caught by strong currents and pulled inside.

Hearing their cries, Isaivanan (17) hailing from Manaveli in Puducherry who rushed into the waters in an attempt to save them got caught in the waves.

The other members of the group, who were on the shore, raised an alarm. Fishermen from Chinna Veerampattinam managed to pull out Kallon who was rushed to Jipmer while the bodies of Amit, Rajeev and Sumath washed ashore.

The bodies were sent to Government General Hospital for post-mortem. A case has been registered and investigations are on.

Three persons said to be IT professionals from Bengaluru drowned in the Bay of Bengal here today.

One person Kalone was admitted to Jipmer Hospital and said to be out of danger.

A search for Isaipriyan,a youth from Veerampatinam is still on.

Police said the youths came to Puducherry as tourists in different groups and two from a group went for a sea bath on the Chinnaveerampatinam beach and were dragged away by swift current.

On seeing this, two from another group jumped into the sea in a bid to save them and were also dragged away in the currents.

A local youth Isaipriyan also tried to rescue them.

While, both went for the sea beach and one from the group which tried to rescue them drowned, people from nearby area, managed to save one and was admitted at the Jipmer hospital.

The whereabout of Isaipriyan is still not known and the search is on.

The body of the deceased were kept at the government general hospital for post-mortem.

Investigation was under way, police added.