Barricades cause hardship to villagers in Bahour 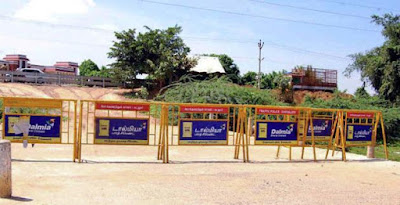 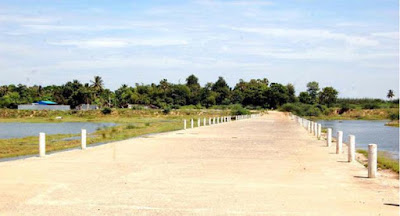 Because of the barricades the villagers of Bahour have to travel 5 km to reach Cuddalore. Appeals to authorities have not yielded any result:— Photos: Special Arrangement

Residents of about 10 hamlets used the road on Pennayr river to reach Cuddalore quickly, but now they have to revert to highway route

Villagers in Bahour Commune are aggrieved over the barricading of the road on the bed dam over the Pennayar River that has deprived them of easy access to Cuddalore town.

Villagers of about 10 hamlets in Bahour had been provided a much shorter route to reach Cuddalore after the Government of Puducherry built a Rs. 10 crore bed dam over the river at Komandanmedu over eight years ago.

Before the bed dam was built, villagers in the Bahour Commune had to travel more than five kms to reach the main town in Tamil Nadu. After the bed dam road was laid, it took less hassle and time to cross the 250 metres to hit Cuddalore.

For residents in Cuddalore too, the bed dam road provided a considerably shorter route to access Puducherry. Besides, the groundwater levels in villages in Puducherry and Cuddalore had also improved after the construction of the dam.

However, recently, villagers in Bahour area have had to revert to the Puducherry-Cuddalore highway route after the Cuddalore district administration decided to put barricades across the bed dam road.

Electricity Minister T. Thiagarajan, who represents Bahour constituency, has now taken up the cause of the villagers. In a memorandum, he has urged Chief Minister N. Rangasamy to pursue the matter with higher authorities in Tamil Nadu to re-open the road for public use.

Mr. Thiagarajan, who had conveyed the grievance of the public to the Cuddalore administration, said his own efforts to persuade them to lift the barricades had been to no avail.

“Due to the lack of a path on the southern side, people in several Bahour villages are experiencing much hardship to reach Cuddalore. Due to the closure of the bed dam road, they have to take the congested Puducherry-Cuddalore road which takes much longer especially during peak traffic hours.

Among the worst affected are patients wanting to reach hospital in an emergency,” Mr. Thiagarajan said.

Urging the Chief Minister to negotiate a solution to the problem of the villagers, Mr. Thiagarajan contended that removing the barricading would benefit people in both Puducherry and Cuddalore.

When contacted, Cuddalore Collector Suresh Kumar said the barricades were put up as a safety measure to prevent persons falling into the river, especially at night. However, the back story is that the area with the presence of three to four wine shops is a haven for tipplers who are a source of nuisance.

The Cuddalore administration has tried to get the Puducherry government to relocate the shops in vain. Some time ago, the PWD wing in Cuddalore had demolished a makeshift mud road laid by some shop owners to provide tipplers access to the outlets. Incidentally, the Pennayar river water is a resource shared by the governments of Puducherry and Tamil Nadu. In 2007, the governments had executed an agreement to share Pennayar river water at Sornavur Anaicut.

This pact aimed to help irrigate 4,778 acres of land in Puducherry and 1,275 acres in Tamil Nadu.