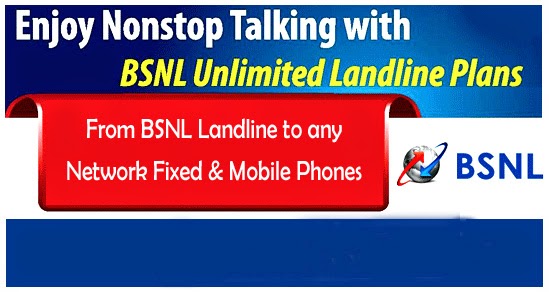 Exclusive: BSNL to offer Unlimited Free Night Calls to Any Network from Landline phones from 1st May 2015 onwards

BSNL - the Largest Landline Service Provider in India has decided to offer Unlimited Free Night Calls to Any Network from it's Landline phones. As per the latest information from BSNL sources, the Unlimited calling offer will be made available to all Landline customers of BSNL from 01.05.2015 onwards.

BSNL has taken this decision  in an attempt to popularize its landline services on PAN India basis. Under the revised tariff plans, BSNL users will be able to make free calls on any mobile and landline phone within India during night hours i.e. from 9 PM to 7 AM.

From 01.05.2015 onwards, BSNL Landline customers will be able to make Unlimited Nighht (9 pm to 7 am) calls to any number in India (CDMA / GSM Mobile / WLL / Landline) as Free without any charges.

In this present hyper competitive market, while all other telecom operators are increasing Voice and Data charges, BSNL is the only one decreasing the rates.

Earlier in 2012, BSNL launched a similar night calling pack at Rs 59 but later it was revoked. It’s a great opportunity for those who seek for cheap voice calling plans. If you think that your expenses on local and STD calls are very high, then switch to BSNL.

Dear readers, please share your views and opinions about these exciting offers from BSNL via comments with us.

Govt. dispenses with system of attestation by gazetted officers

Govt. dispenses with system of attestation by gazetted officers

The government on Thursday dispensed with the system of gazetted officers attesting copies of certificates of candidates while applying for admission to educational institutions or for jobs.

An order from the Department of Administrative Reforms said that hereafter there should be no insistence on attestation by gazetted officers and all government departments and undertakings should accept self-attestation of certificates by candidates.

The Union Ministry of Personnel, Public Grievances and Pension had instructed the government to adopt the new system of self-attestation by candidates. 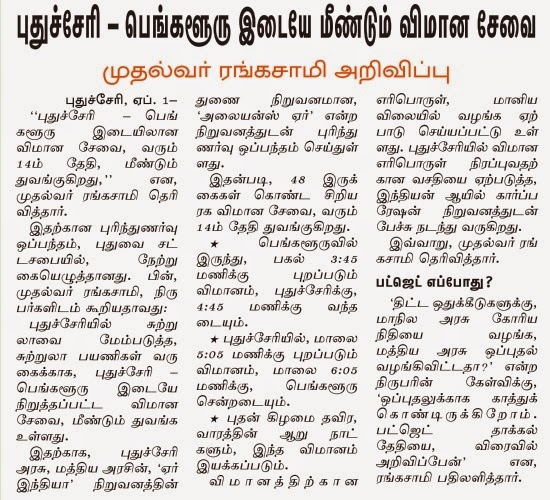 Courtesy_
Dinamalar ePaper
Also read the related stories
Now the air is thick with hopes of growth
PUDUCHERRY, April 1, 2015
S. PRASAD
Resumption of air connectivity sets off expectations of industrial, tourist development
The government has proposed to extend the runway by an additional 1,100 metres by acquiring the land in neighbouring Tamil Nadu
The resumption of the much awaited air connectivity to Puducherry which has been on and off the aviation map intermittently, is expected to increase the tourist footfalls to the city.
Though commercial flight services in Puducherry started with a bang, within a short period of time it had become defunct. This has been the recurring scenario in Puducherry.
After Vayudoot stopped commercial services from the airport in 1991, the Puducherry government made unsuccessful attempts to revive flight operations from Puducherry. Private carrier Spice Jet, which introduced its flight service on the Puducherry-Bengaluru sector on January 2013, discontinued its services in February 2014 stating that their operations were not financially viable.
I Syed Sajjadh Ali, Chairman, CII, Puducherry, welcomed the proposed resumption of air connectivity from Puducherry to Bengaluru as a welcome step.
“Keeping in view the rapid industrialisation and promotion of IT-related activities, the revival of air connectivity would be of great help to industries and will certainly improve tourism. We have lots of traffic between Puducherry and Bengaluru. There may be some hiccups. But businessmen and international travellers can have multiple options instead of going to Chennai. Even people who want to go to France can get a connecting flight to Bengaluru,” Mr. Sajjadh Ali said.
More than the tourism sector the industries can also align with the air connectivity and grow with it. Hopping flights to connect Puducherry with other parts of the country would be viable and people can also avoid road travel, he said.
According to a Tourism Department official, there is a general perception among the people that air connectivity from the Puducherry airport is not viable.
Though there might be some initial hiccups the project would definitely become feasible over a period of time.
Originally, a Memorandum of Understanding was signed in June 2007 with the AAI for developing the airport in two phases to operate ATR type aircrafts.
After completion of first phase expansion of runway work and terminal building, SpiceJet Airlines started operation of its Bombardier aircraft from January 2013 and stopped the operation in February 2014.
The territorial administration had persuaded the Tamil Nadu government to make available the required land in Vanur in Villupuram district to make the airport functional.
Sources: http://goo.gl/MPpdZw
Also read the related stories
Minister, officials inspect airport infrastructure
PUDUCHERRY, April 2, 2015
STAFF REPORTER
Bengaluru-Puducherry flights from April 14

Thorough scrutiny:Tourism Minister P. Rajavelu and officials from the Air Ports Authority of India take a look at the facilities at the Puducherry Airport on Wednesday. —Photo: T.Singaravelou
Tourism Minister P. Rajavelu along with officials of the Airports Authority of India (AAI) on Wednesday inspected the infrastructural facilities at the Puducherry Airport ahead of resumption of flight services from Bengaluru to Puducherry from April 14.
Mr. Rajavelu accompanied by R. Venkatachalapathy, Airport Director, visited the terminal building and studied the logistics and other requirements. He discussed with officials about the feasibility of expansion of the runway and creating other required infrastructure in the Airport.
Later speaking to reporters, Mr. Rajavelu said that Alliance Air, a subsidiary of Air India had agreed to operate flights on the Bengaluru-Puducherry sector on all days except Wednesdays. The Puducherry government was hoping to get the operator to start their services during morning hours also. The government was holding talks with the operator, he said.
The Puducherry government will be setting up two counters in the Airport. The first counter would provide logistical assistance as well as act as an information centre and help desk for tourists while the second would be a food counter for tourists, he said. Secretary to Tourism R. Mihir Vardhan was also present.
Sources: http://goo.gl/jWI12D