Man dies of electrocution after spitting on live wire

Man dies of electrocution after spitting on live wire
N Ganesh in Mumbai
April 06, 2010 01:47 IST
In a bizarre accident that seems to come straight out of the Ripley's believe it or not, a man was electrocuted when he spit from his house on to high-tension electric wire on Sunday.
The incident happened at Sainath Nagar in Virar, a suburb city about 60 km from Mumbai.
Mohammad Shaikh alias Munna, 44, was standing in his second floor apartment chewing a mouthful of gutka when he spat out and connected with the high tension wire that was barely some 3 feet from the building.
The moment his spit touched the wire carrying 25,000 volt of power, Shaikh was electrocuted and was pulled out from the balcony of his house and hurled two floors down to his death.
"The high-tension wire belongs to Tata Power and carries power to the Virar railway station. We had on several occasions made a demand to the authorities to shift the wire or insulate it so that it does not pose a hazard to the people living in the building adjacent to the line," said Ayub Baluch, a local politician, a former member of legislative assembly.
Ayub added that Shaih's death was unfortunate as he only breadwinner of the family and ran an automobile painting business in Virar.
He is survived by his wife and three daughters.
The Virar police station has registered a case of accidental death.
There is provision in the Electricity Act to award immediate compensation of Rs 10,000 to the next of kin in case of accidental death due to electrocution.
Sources: http://goo.gl/63le1n
Posted by Selvam P at 8:58 PM No comments:

12 cities in Karnataka have got new names from Nov.1 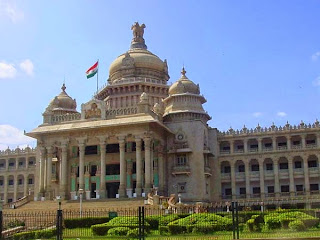 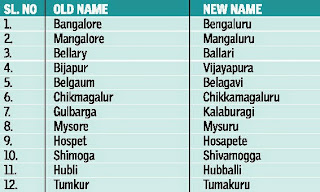 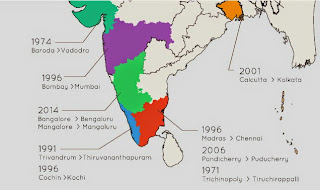 12 cities in Karnataka have got new names from Nov.1

It is now official. The State capital has shed its anglicised name Bangalore. It will be called by a name with a distinct local flavour: Bengaluru.

On the eve of the 59th Karnataka Rajyotsava, the government on Friday issued a special gazette notification to change the names of 12 cities and towns.

The changes will come into effect from November 1, 2014, said the notification, which spells the changed names in both Devanagari and Roman (English) scripts, and Kannada. The Chief Minister Siddaramaiah announced the change of names at his home office 'Krishna'.

The Union Ministry of Home Affairs gave its approval saying "it has no objection to the change of names", eight years after the State government sent the proposal following a suggestion by the late U.R. Ananthamurthy, Jnanpith award winner. Law and Parliamentary Affairs Minister T.B. Jayachandra said, "We have changed the names. It is now left to institutions and government bodies to make suitable changes." Several firms and TV channels have been using the new name.

Some of the other cities that have been renamed over the years.