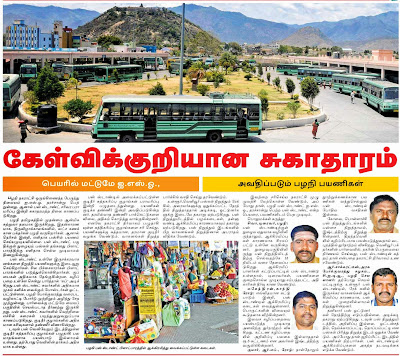 Bandh in Pondy on Aug. 27: for arresting Rowdies 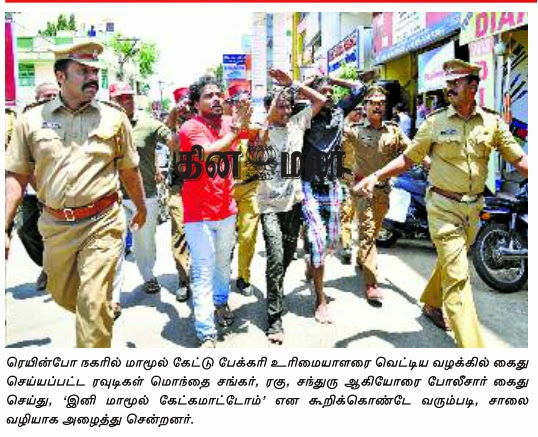 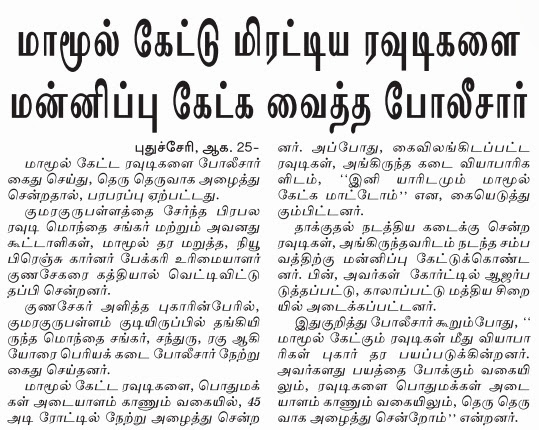 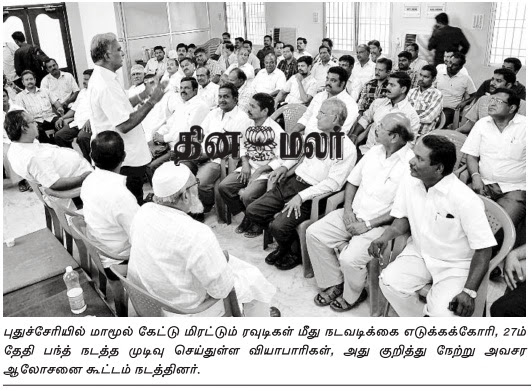 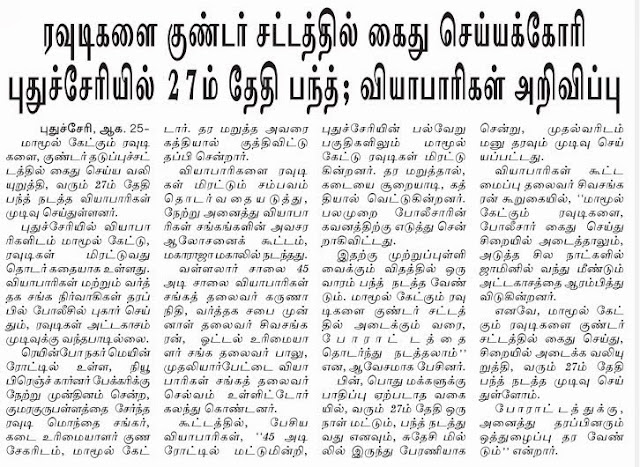 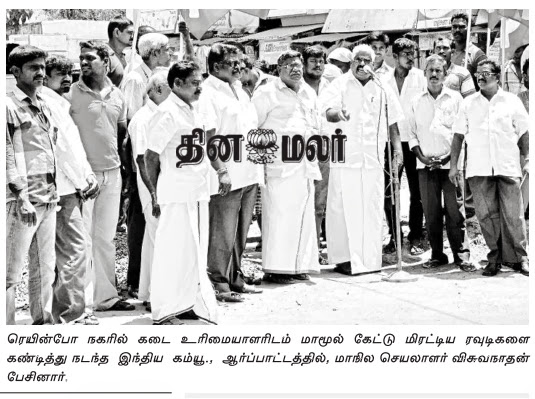 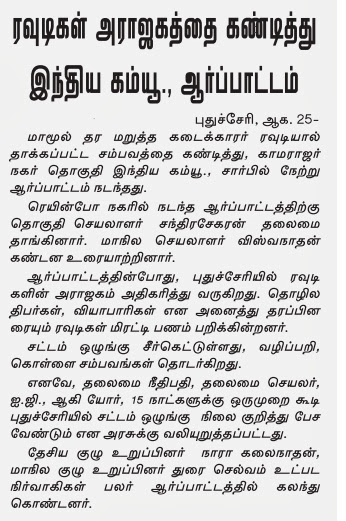 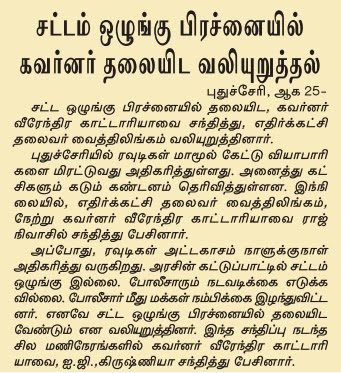 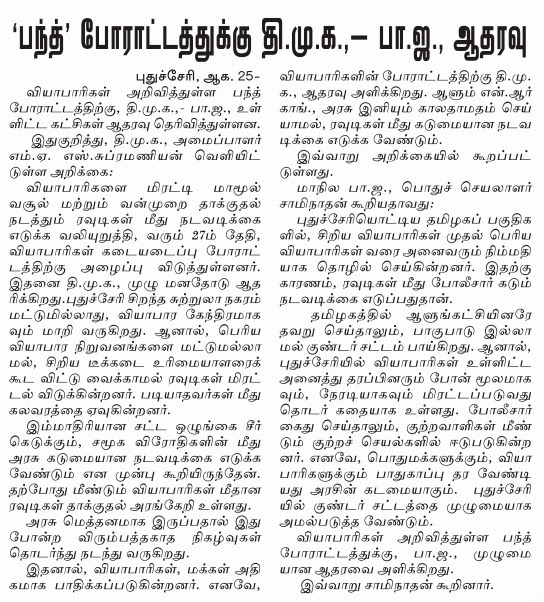 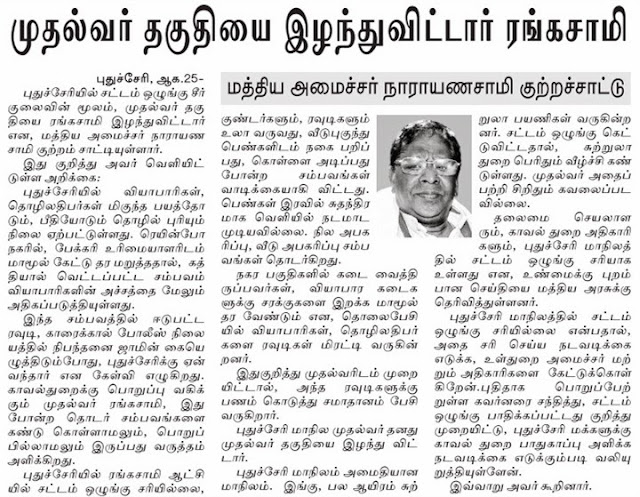 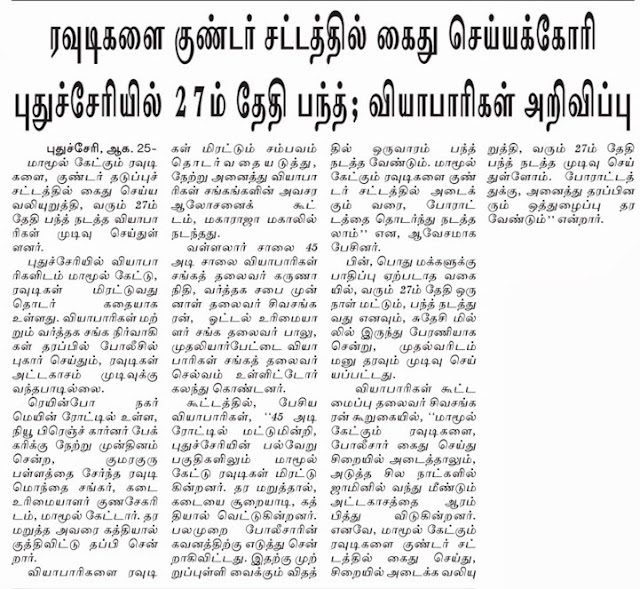 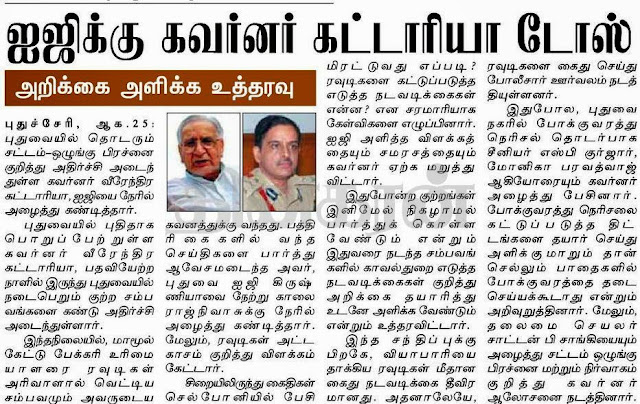 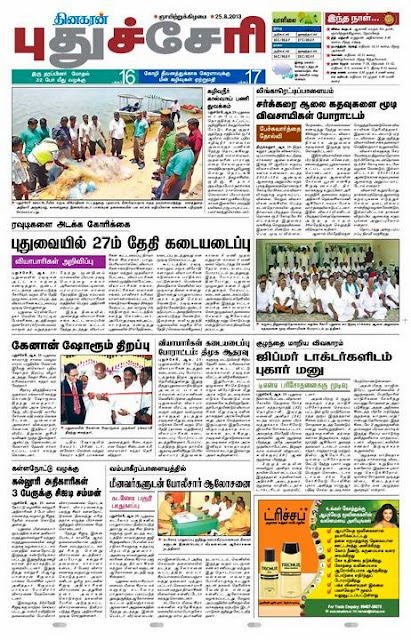 Virendra Kataria, Lieutenant Governor, on Saturday directed the Inspector General of Police, R.S. Krishnia to submit report on steps taken to curb incidents of extortion in Puducherry. The order assumes significance in the background of recent incidents of attack on traders in Puducherry. Mr. Kataria, who held an urgent discussion with Mr. Krishnia about the prevailing Law & Order situation in the Union Territory, directed him to take stern action against those responsible for the attack on the trader at Rainbow Nagar on Friday by an extortioner.

A Raj Nivas press communiqué said that he had instructed that steps should be taken to see that such incidents do not recur in future.

Citing reported threats from goondas and prisoners to the traders through mobile phones from inside the jails demanding ransom, he had ordered the IGP to take firm action and submit report thereon along with a specific plan of action to curb such incidents. 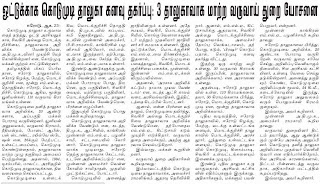 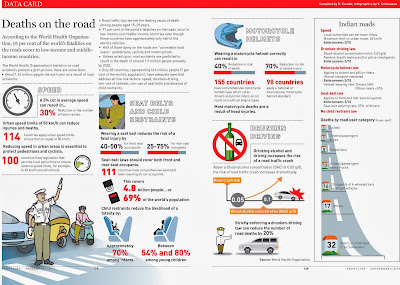 Deaths on the road

According to the World Health Organisation, 91 per cent of the world's fatalities on the roads occur in low-income and middle-income countries. By R. SURESH

The World Health Organisation's statistics on road accidents present a grim picture. Here are some facts:

* About 1.24 million people die each year as a result of road accidents.

* Road traffic injuries are the leading cause of death among people aged 15–29 years.

* Half of those dying on the roads are "vulnerable road users": pedestrians, cyclists and motorcyclists.

* Unless acted upon, road accidents are predicted to result in the death of around 1.9 million people annually by 2020.

* Only 28 countries, representing 416 million people (7 per cent of the world's population), have adequate laws that address all five risk factors: speed, drunken-driving, non-use of helmets, non-use of seat-belts and absence of child restraints.

Every year the lives of almost 1.24 million people are cut short by road traffic accidents. Between 20 and 50 million more people suffer non-fatal injuries, with many incurring a disability. According to an estimate made in 2000, the economic cost of road accidents was approximately $518 billion. National estimates have illustrated that these accidents cost countries between 1 and 3 per cent of their gross national product, while the financial impact on individual families has been shown to result in increased debt and even a decline in food consumption.

Who is at risk?

Socioeconomic status: Road traffic injury death rates are the highest in African and Eastern Mediterranean countries. Even within high-income countries, people from lower socioeconomic backgrounds are more likely to be involved in a road accidents than their more affluent counterparts.

Age: Young adults aged between 15 and 44 years account for 59 per cent of global road traffic deaths.

Sex: From a young age, males are more likely to be involved in road traffic crashes than females. Seventy-seven per cent of all road traffic deaths occur among men. Among young drivers, young males under the age of 25 years are almost three times as likely to be killed in a car crash as young females.

Speed: An increase in average speed is directly related both to the likelihood of a crash occurring and to the severity of its consequences. Pedestrians have a greater chance of surviving a car crash at 30 km/h or below.

Drunken-driving: The risk of being involved in a crash increases significantly above a blood alcohol concentration (BAC) of 0.04 grams per deci-litre (g/dl).

Distracted driving: Drivers using mobile phones are four times more likely to be involved in a crash than those not useing a phone. Hands-free phones are not much safer than hand-held phone sets. 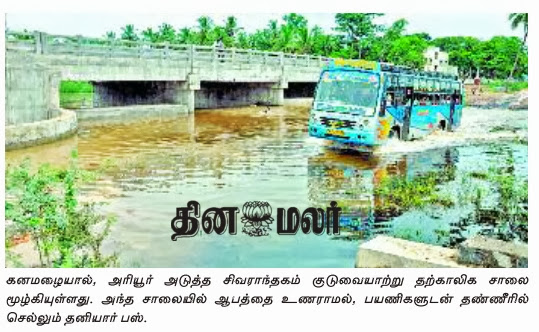 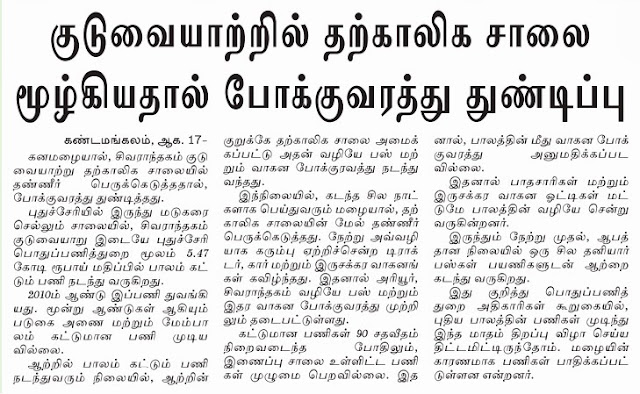 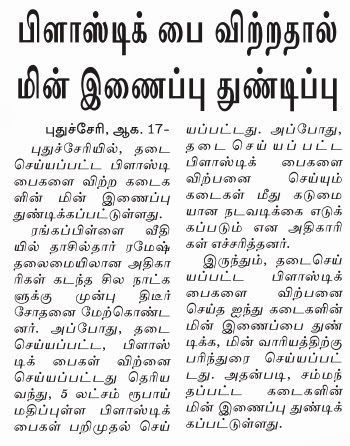 As the sun goes into a peak time of solar activity I'm very concerned  about the latest news from NASA.

A chunk of the sun is missing and  heading toward earth at 2 million miles per hour. It's an astonishing 80 times bigger than earth.

Scientists are baffled by the recent activity,  warning us a global blackout could occur.

Although no timetable was given on the arrival of this solar flare, actions like this make me wonder if their hiding something. 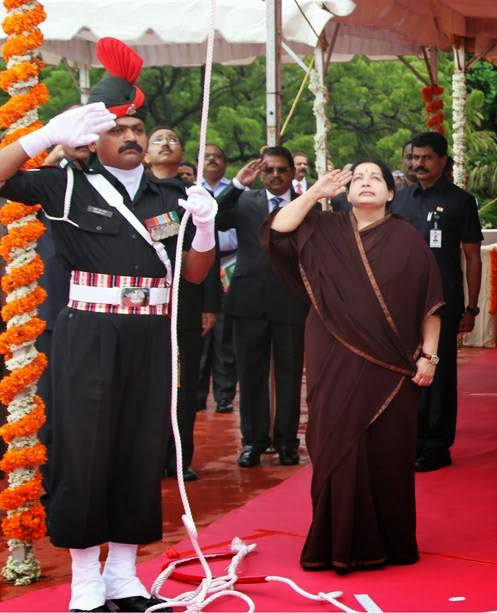 Sources: http://news.vikatan.com
Posted by Selvam P at 12:09 PM No comments: 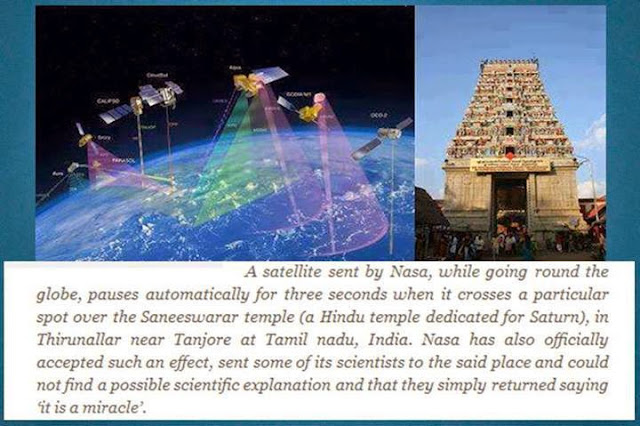 A satellite sent by NASA, while going round the globe, pauses automatically for three seconds when it crosses a particular spot over the Saneeswarar temple (a Hindu temple dedicated for Saturn), in Thirunallar near Tanjore at Tamil Nadu, India. NASA has also officially accepted such an effect, sent some of its scientists to the said place and could not find a possible scientific explanation and that they simply returned saying "it is a miracle".