Courtesy_
Dinakaran ePaper
Posted by Selvam P at 10:52 AM No comments:

Beware while using your Credit Card 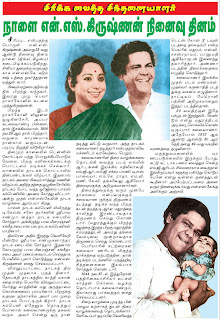 Courtesy_
Maalaimalar ePaper
Posted by Selvam P at 10:21 AM No comments: 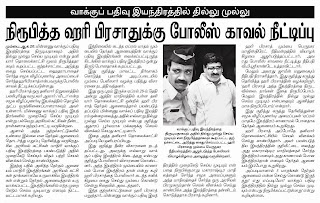 Photo AFP. BREAKING THE ICE: Russia's SCF Baltica tanker during a voyage along the Northern Sea recently.
Faster and cheaper than the Suez route
Russia has opened a shortcut northern sea route from Europe to Asia across the Arctic, reasserting itself as the dominant power in the strategic mineral-rich region.
A Russian tanker, escorted by powerful nuclear icebreakers, successfully skirted the icebound Arctic coastline of Russia with a load of gas condensate for China.
The 114,564-tonne tanker Baltica is the first super vessel to navigate the northern waterway. Earlier, only ships with a maximum deadweight of 14,000 tonnes ventured the route. Officials said the successful journey proved the route was safe and economically viable.
The Arctic Sea route is almost twice faster than the Suez Canal route and about 15 per cent cheaper, according to Leonid Mikhelson, head of Novotek, a Russian natural gas company which sent the Baltica on its trailblazing voyage.
"Next year we're planning to deliver more shipments of gas condensate to the markets of China and South Korea via the Arctic route," the Novotek chief told a press conference in Moscow on Thursday. He said the new route would enable the company to build an LNG plant in gas-rich Yamal Peninsula in Russia's northeast.
The northern route from the Russian port of Murmansk to Shanghai is 10,600 km long, while the Suez Canal one is 17,700 km. Shippers will save a million dollars per tanker in fuel costs alone.
Two icebreakers cleared the way for the Baltica through 4,000 km of icy seas before reaching the Russian port of Pevek in the Chukotsky Sea, from where the tanker will continue its journey to China on its own.
The Russian state-controlled shipping company Sovcomflot, which owns the Baltica tanker, said it planned to operate the new route during four summer months. The waterway may be open for longer periods if global climate warming causes Arctic ice to melt.
The opening of the northern route for tankers and other cargo ships could re-carve the global sea transportation map. Russia will be the biggest winner as the lucrative trade route runs through its territorial waters and it is the only country that has a fleet of nuclear icebreakers.
Courtesy_
http://www.thehindu.com
Posted by Selvam P at 12:01 PM No comments: 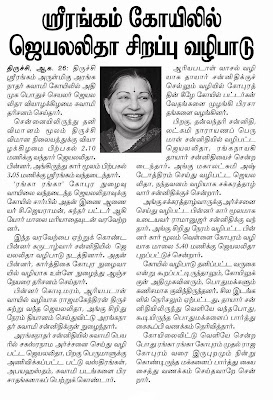 Photo:M.Moorthy AIADMK general secretary Jayalalithaa at Sri Ranganathaswamy Temple at Srirangam on Thursday.
All India Anna Dravida Munnetra Kazhagam general secretary Jayalalithaa offered prayers at the Ranganathaswamy temple in Srirangam on Thursday.
A 'Sahasranama Archana' was performed to the presiding deity.
She also offered prayers at the Thayar, Chakarathazhwar and Ramanujar sannidhis.
On her arrival by a special flight at 2.20 p.m., Ms. Jayalalithaa proceeded to the temple where she was given a rousing welcome by a large gathering of AIADMK workers.
Accompanied by her friend Sasikala Natarajan, Ms. Jayalalithaa spent nearly three hours at the temple.
Tight security arrangements were in place.
She later left for Chennai.
Courtesy_
http://www.thehindu.com
Posted by Selvam P at 11:53 AM No comments:

Paintings from Mysore and Bangalore

Paintings from Mysore and Bangalore
Aug 16, 2010

Google CEO Eric Schmidt
The chief executive of Google has a novel suggestion for those wishing to preserve their online privacy: Change your name.
Eric Schmidt, the CEO of the company made the comments in a Wall Street Journal article about the implications of having so much data online.
"I don't believe society understands what happens when everything is available, knowable and recorded by everyone all the time," he told the paper.
He predicted that "every young person one day will be entitled automatically to change his or her name on reaching adulthood in order to disown youthful hijinks stored on their friends' social media sites," the report said.
"We really have to think about these things as a society," he added. "I'm not even talking about the really terrible stuff, terrorism and access to evil things."
The comments came as Google's Android operating system for mobile phones is set to overtake Apple's iPhone, and as the company is snapping up social networking start-ups as it attempts to beef up its competition with Facebook.
Combining its wealth of data with the ability to know where you are creates a whole new level of location-based services. "We know roughly who you are, roughly what you care about, roughly who your friends are," Schmidt said.
"I actually think most people don't want Google to answer their questions. They want Google to tell them what they should be doing next." The implication: "If you need milk and there's a place nearby to get milk, Google will remind you to get milk. It will tell you a store ahead has a collection of horse racing posters, that a 19th-century murder you've been reading about took place on the next block," the report said.
From here to reading your mind, is but a short step or two, Schmidt said. "As you go from the search box (to the next phase of Google), you really want to go from syntax to semantics, from what you typed to what you meant," Schmidt said. "And that's basically the role of (Artificial Intelligence). I think we will be the world leader in that for a long time."
Courtesy_
http://www.thehindu.com
Posted by Selvam P at 10:13 PM No comments: