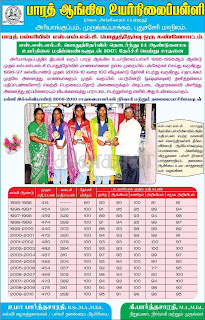 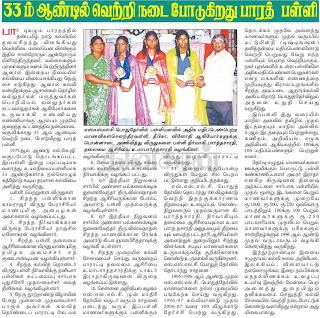 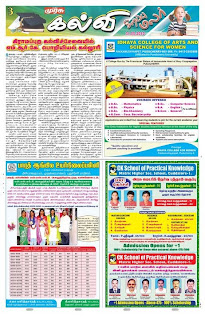 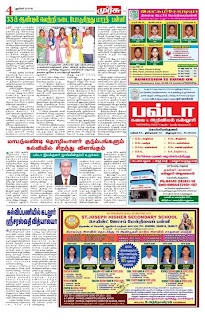 Page Nos.3 and 4 of Special Supplement

Diligence the reason behind success

PUDUCHERRY: Reporters and photographers have been swarming National English High School in Abishekapakkam since the SSLC results were announced on Wednesday morning. And in the midst of it all, the cynosure of all eyes, D. Tamizharasan, Puducherry topper and second in Tamil Nadu and Puducherry together in the SSLC exams, was basking in all the well-deserved attention. After all, it has taken him almost 10 hours of study a day to get a whopping 494 out of 500.

"It's a long-time aim that I have fulfilled by becoming a topper," he says with a grin. In the last three months before the exams, Head Master and mathematics teacher S. Arumugam coached him for an extra four hours, to help him score a centum in the subject. Mr. Arumugam credits Tamizharasan for inquisitiveness for all things beyond the world of academics, sincerity and capacity for hard work as reasons for his success.

His father, who works as Head Constable at the office of the Director-General of Police, his mother, a homemaker and his older sibling have all been encouraging and supportive, and so have friends, with whom there is no ego, Tamizharasan acknowledges. "This is the result of a lot of hard work," he emphasises.

Sincerity and diligence, combined with steadfast determination, are what helped G. Revathi, student of Vivekananda Higher Secondary School, come second in Puducherry and third in Tamil Nadu and Puducherry together with a score of 493 on 500. "I have wanted to be an SSLC topper since I was a child and today I have achieved it," she says confidently. Although she likes painting, Revathi admits to being a studious type, who has always done well in academics. "While her mother has motivated her, all credit goes to Revathi herself, who really needs no pushing to do well," reveals M. Gopalakrishnan, Revathi's father.

What Revathi and her classmate A. Sudha, who has emerged third in Puducherry State with only one mark behind Revathi, have to say about their teachers is that they were always eager to clear doubts and conducted frequent tests to improve their performance. "I was able to study without any tension," she says with a shrug, adding that her father, who works in a grocery store, and her homemaker mother sat up with her whenever she studied.

A tension-free approach was also adopted by S. Manikandan of Thiru Vi Ka Government High School, who also emerged third in Puducherry, and first among all government schools in the State. "I love cricket, and I play it everyday. When an India match is on, I find it hard to resist watching television," he confesses. But during exam time, he gave up watching TV to attain his objective of standing first among all students. Thiru Vi Ka has the pride of also producing another government school topper, K. Saranraj.

What all these kids surprisingly have in common (apart from the centum in science) is the ambition of becoming doctors some day. Knowing their determination and diligence, they will probably all make it. 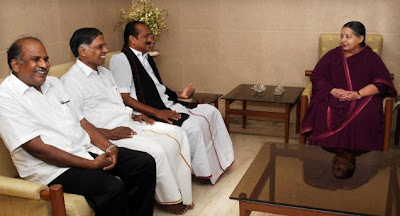 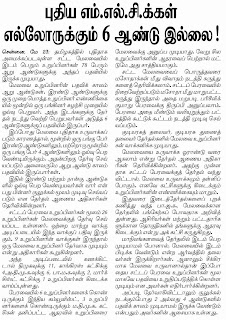 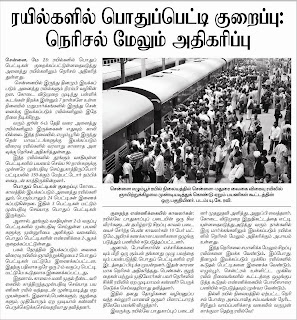 'Google, Sony among world's most reputed companies'
PTI
Internet search titan Google and electronics giant Sony are among "the world's most reputed companies", as customers have placed a lot of faith and trust in these firms, says a study.
The world's most reputed companies list compiled by the U.S.—based brand and reputation management consulting firm Reputation Institute has been topped by Google followed by Sony.
The list is made on the basis of admiration, trust and good feeling that consumers have towards a company.
Entertainment and media firm The Walt Disney Company and German luxury car maker BMW have been ranked at the third and the fourth place respectively while auto maker Daimler/ Mercedes—Benz secured the fifth place in the world's 28 most reputed companies.
"Top rated Sony and Google were consistently strong around the world, with Sony scoring among the top five in all regions and Google in four of the five regions. Google did not make it into Asia's top five," the survey said.
In the Asia region, The Walt Disney Company got the top rank, followed by Daimler/Mercedes—Benz, BMW, Sony and Singapore Airlines.
The list has 12 American companies while there are three each from Germany and Japan.
Besides, technology giant Apple bagged the sixth rank, handsets maker Nokia (seventh), Sweden's retailer IKEA (eighth), car—manufacturer Volkswagen (ninth) and Chip maker Intel (10th).
"Technology has a powerful grip on the global rankings.
Companies like Google, Sony, Apple, Nokia, Intel, and Microsoft have earned our trust and respect because they are all—pervasive solution—providers that affect our daily lives," said Reputation Institute Chairman Charles Fombrun.
Mr. Fombrun added, "Disney's global mind—share as an entertainment provider is remarkable, as is the admiration with which consumers hold auto—makers BMW and Daimler/Mercedes—Benz. They are power—houses of reputation— building around the world."
The report also found that Apple, Ford, Google, Nestle and Sony enjoyed better reputation globally compared to their home markets.
The survey was conducted on 600 largest companies from 27 countries, out of which 28 were selected for the list.
Others on the list are Microsoft (11th), Johnson & Johnson (12th), Panasonic (13th), Singapore Airlines (14), Philips Electronics (15th),IBM (17th), Hewlett—Packard (18th), Nestle (20th), Honda Motor (24th), Coca—Cola Company (25th) and Procter & Gamble (27th).
Courtesy_
http://beta.thehindu.com
Posted by Selvam P at 4:02 PM No comments:

NEW DELHI: The Central Government on Friday said ICICI Bank and HDFC Bank could not be called Indian-owned banks, setting at rest the debate generated over the nationality of the top two private sector lenders.

"At best, the two can be called Indian-controlled banks," Department of Industrial Policy and Promotion (DIPP) Secretary R. P. Singh said when asked about the government's stand in the wake of the two seeking clarifications on the matter.

"ICICI Bank Managing Director and CEO (Chanda Kochhar) met me two days ago and discussed the issue with me," he said.

ICICI Bank had maintained that it continued to be an Indian bank as its management and board was Indian.

However, ICICI Bank and HDFC Bank have over 74 per cent foreign holding, including that of foreign banks and overseas institutional investors. "Banks will be covered in one paper, which we are trying to bring out on the financial aspects totally... it will cover banks also," he said referring to the six discussion papers on FDI that the DIPP is planning to bring out soon.

"There is a way of resolving their problems. We will try to find a solution for that. The handicap they are suffering, we will try to resolve," Mr. Singh said. The banks' claim that they are Indian is significant in the light of the government announcing new FDI norms last year which say if indirect FDI in an Indian company exceeds 50 per cent, its investment in subsidiaries will be treated as foreign investment. 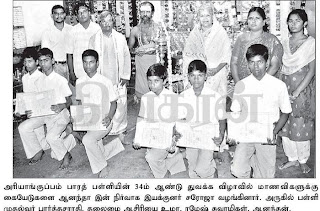 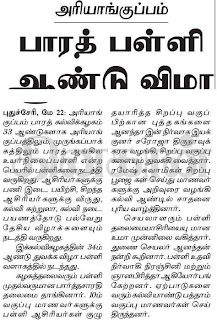 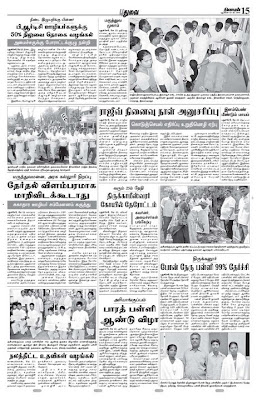 Courtesy_
Dinakaran ePaper
Posted by Selvam P at 9:05 AM No comments: 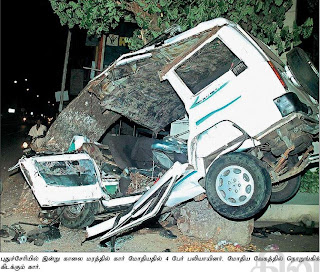 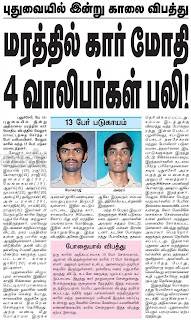 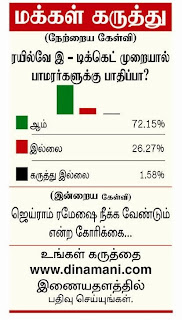 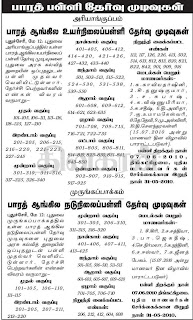 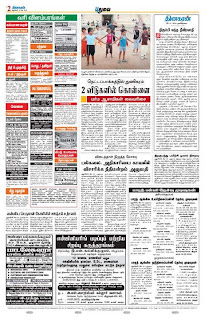 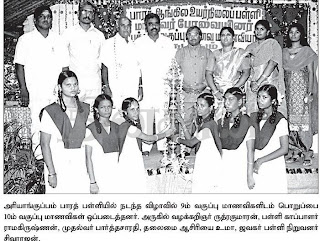 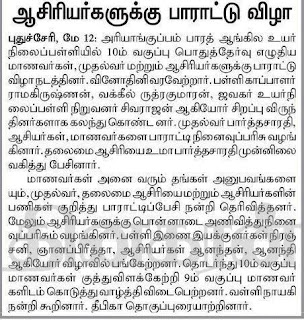 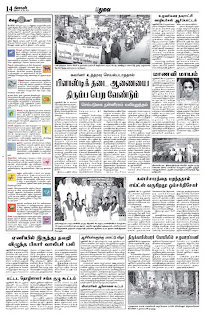 fear of the unseen:There are contrary views over possible hazards caused due to mobile phone towers such as this in Madurai.
MADURAI: "This is an urgent plea to environmentalists and to those within the telecommunications industry, to doctors and businesspeople and government officials, that microwave radiation is an imminent danger to all of us more or less equally and that for our common survival we must immediately halt the expansion of wireless communications upon this earth. There is no greater threat to our common future," wrote Arthur Firstenberg, an American author, on June 22, 1997.

Nearly 13 years have elapsed since the statement was made. Yet, the use of mobile phones has increased by leaps and bounds and it is hard to find a family without a mobile phone even in the remotest parts of a place like Madurai. There have been apprehensions on possible health hazards caused to people living near mobile base stations and many cases have also been filed. But, a majority of the judicial pronouncements have only ruled against these apprehensions.

K.V. Vijayakumar, a lawyer who shifted his practice from the Madras High Court Bench here to the Supreme Court, points out that disposing of a case filed in 2004, a Division Bench of the Bombay High Court had directed the Union Health and Family Welfare Ministry to conduct a scientific study on the issue. Accordingly, a committee was constituted in 2006 under the chairmanship of N.K. Ganguly, the then Director General of Indian Council of Medical Research.

The Committee, after extensive deliberations, opined that overall there was not enough evidence to show direct health hazards of Radio Frequency (RF) exposures from mobile base stations though subjective symptoms such as sleep disorders, cognitive disorders, memory disturbances and hearing disturbances had been reported. It also said that RF exposures from mobile base stations were much less than from radio and television transmissions.

Further, the Atomic Regulatory Board also submitted a report before the Bombay High Court stating that RF waves used for mobile phones were not covered under the definition of the term 'radiation' as given in the Atomic Energy Act, 1962. It also stated that non-ionizing radiations do not have the capability to ionize the matter with which they react.

In 2000, the Radiation Protection Division of the U.K. Health Protection Agency had reported that the balance of evidence indicated that there was no general risk to health of people living near base stations. Even the Delhi High Court while disposing of an original suit filed in 2002 opined that so far there was neither any conclusive research nor authoritative scientific evidence to show that radiations emitted by such transmission towers were dangerous to the health of human beings.

Mr. Vijayakumar also points out that on October 12, 2006, a Division Bench of the Kerala High Court headed by Justice K.S. Radhakrishnan (now a Supreme Court judge) had held that permission granted for installation of mobile base stations would neither cause any health hazard nor affect the fundamental right guaranteed to citizens under Article 21 of the Constitution.

"Right to life enshrined under Article 21 includes all those aspects of life which make it meaningful, complex and worth living. Development of Technology has its own ill-effects on human beings, but, at times people will have to put up with that at the cost of their advantages," the court had observed.