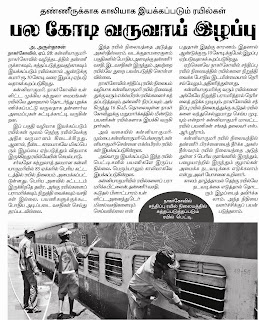 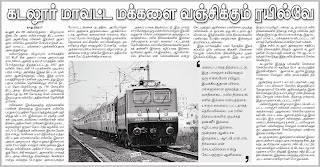 Who is the victim of a bandh?

IT employees need a collective voice to press for rights: experts

IT employees need a collective voice to press for rights: experts

Long way to go:Those in the IT sector have their share of challenges, say experts.

CHENNAI: In the modern day workplace, it is possible to sit inside a cubicle in Chennai and work for a client in San Francisco or Seattle. The IT sector, which has been at the forefront of this globalisation of labour, has drastically altered the nature of the debate about employee rights and contractual obligations.

Pointing out that most fresh recruits into the sector are young graduates who have no idea about their rights, Karthik Shekhar, General Secretary, Union for IT & ITES employees (UNITES), says: "Managers and team leaders are just glorified terms. They manage processes or resources, not people."

He says that since IT employees are not covered by the Industrial Disputes Act, some kind of collective representation is required to press for their rights.

"Long and erratic work hours, not being paid what they are promised when they are on a foreign assignment and burnout issues are all legitimate concerns that have to be raised. But companies have managed to convince employees that unions are for blue collared employees," Mr. Shekhar adds.

Psychiatrist Vijay Nagaswami says "The IT sector seems to have built its strategic processes around attrition. They expect the HR support to last only for a couple of years, so hiring freshers from campus recruitment on a regular basis is how they deal with the situation."

According to him, IT sector lifestyles play havoc with family lives. Killing commutes and working as per overseas time-zones make for very poor support opportunities from families and friends.

"When weekends are used only to catch up on sleep rather than for recreational pursuits, burnouts are not far behind," he adds.

In spite of the lack of space for collective voicing of concerns, Gayathri Jayaraman, who was in the IT sector for six years before she quit, says that since companies want to retain the best employees, grievances are addressed better than in any other sector. But the HR treats a person like a resource, she says, and not like a human being.

"Also the work becomes monotonous after a point since nothing original or creative comes out of it."

On the existing scenario, K. Purushothaman, Regional Director, NASSCOM, says that most issues are sorted out through proactive HR policies. While handling overseas projects against tight deadlines, "companies cannot afford to lose 10 minutes or an hour on manpower issues," he says.

Email ThisBlogThis!Share to TwitterShare to FacebookShare to Pinterest
Labels: computer, IT

First Train from Villupuram to Mayiladudurai at 18:20 today... 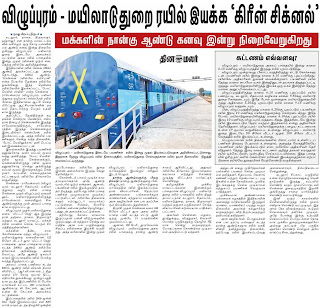 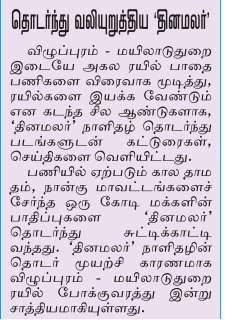 Customer files complaint against Airtel
Express News Service
First Published : 15 Apr 2010 04:28:00 AM IST
CHENNAI: Suburban police are investigating a case that has been filed against Airtel, for the alleged cheating of a customer by sending promotional messages, which is in strict violation of the Telecom Regularity Authority of India Act, 2005.
Based on the directive from the Judicial Magistrate Court, Tambaram, the suburban police registered the case against Airtel and began investigations.
L Infant Dinesh (26), a Madras High Court advocate, residing at Nerkundram, was using an Airtel postpaid connection under the Zero Rental Plan. On August 26, 2009, he received an Internet advertisement on his mobile, said the official release.
As soon as Dinesh clicked the advertisement promo on his mobile, he received an instant message from the service provider, stating that he had downloaded a game and towards that Rs 99 worth talk time was being charged to his account. The complainant Dinesh had viewed the promo for not more than one second and moreover the promo appearing on his mobile had not given him prior information about the cost involved.
Meanwhile, the Airtel company maintained that all its customers who had selected the Zero Rental Plan were connected with Airtel Live Service and Dinesh who had also subscribed to this plan, must have downloaded the game.
When Dinesh asked Airtel for clarification, the officials there did not respond properly, and seemed interested in only collecting the payment for the service availed of and disconnecting his mobile connection, said the official release.
Dinesh then verified the issue with the TRAI -Act, 2005 and wrote to Airtel that the company had violated the Act which said that no teleservice company can charge its customer without getting prior approval from the customer and then went ahead and filed a petition with the Judicial Magistrate Court, Tambaram against Airtel.
Meanwhile the official statement from Airtel said, "The customer was using a postpaid connection via which premium content was downloaded using Airtel Live WAP amounting to Rs 99. Airtel Live provides free usage on the Airtel live platform, and charges only for the content (themes, animations, games, wallpapers etc.) that has been downloaded. The download in this case was from a third party site."
Courtesy_
http://expressbuzz.com
Also visit the following link:
http://forumz.in/f16/
Posted by Selvam P at 11:24 PM No comments: 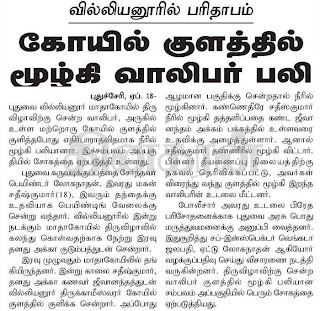 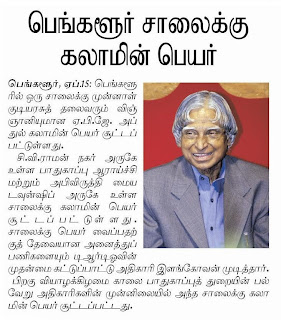 Courtesy_
Dinamani ePaper
Posted by Selvam P at 9:03 AM No comments: 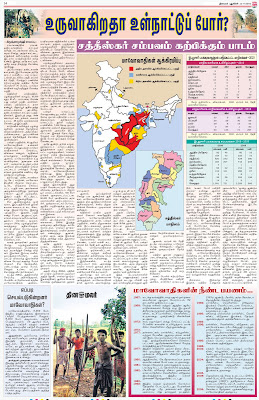 Courtesy_
Dinamalar ePaper
Posted by Selvam P at 7:51 AM No comments:

State to appoint committee for fixing fee in private schools 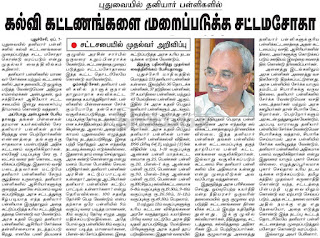 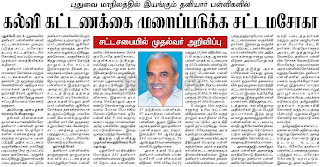 Also read the related stories in THE HINDU as follows:
Posted by Selvam P at 12:43 PM No comments:

Parliament: Third Front bug bites again
7 Apr 2010, 0445 hrs IST, Amita Shah, ET Bureau
NEW DELHI: Just three days before Parliament’s budget session resumes, top leaders of the Left and other non-Congress, non-BJP parties will get together to chalk out a joint strategy to take on the Manmohan Singh government. In what will add to the discomfiture of the UPA, some outside supporters like Mulayam Singh Yadav’s Samajwadi Party and Lalu Prasad Yadav’s RJD, are likely to attend the meeting on April 12.
The move, which is mainly aimed at intensifying the struggle against price rise and increase in fuel prices, would mean that the government will have to do some tightrope walking in Parliament to complete its financial business.
The Left and SP have already declared their intention to bring cut motions in Parliament when the finance bill is taken up. BJP, which is also planning to bring cut motions, has indicated that it will back those brought by other parties including the Left.
SP, RJD, TDP, AIADMK, BJD, RLD and LJP have accepted the invitation for the April 12 meeting, initiative for which was taken by the Left. BSP and INLD have also been invited, but are yet to respond, according to Left sources. Uttar Pradesh chief minister Mayawati’s stand would be crucial. Given the wafer-thin majority, the government will be banking on the 21-MP BSP to provide it the numbers.
The meeting, which will follow the Left’s “jail bharo” agitation on April 8, will decide on “how to carry forward the fight against price rise and government’s refusal to roll back the hike in prices of petrol and diesel inside and outside Parliament,” a Left leader said. The Left is also trying to reach out to other parties to oppose the civil nuclear liability bill. The meeting may be held at a neutral venue like Parliament.
In the earlier part of the budget session, the entire opposition, RJD and SP were in tune against the increase in fuel prices, price rise, cut in fertiliser subsidy and taxation proposals. The Left would also like to see arch-rival Mamata Banerjee’s Trinamool Congress cornered on the issue of fuel prices. The Trinamool Congress and DMK, both constituents of the UPA, had expressed reservations on the issue.
In the 543-member House, UPA has the assured support of 262 members, while NDA has 159 members. The remaining opposition parties, including the Samajwadi Party (22), BSP (21), CPM (16), BJD (14), AIADMK (9), TDP (6), CPI and RJD (4 each), JD-S (3), TRS, Forward Bloc, and RSP (2 each), add up to 105 MPs. This leaves the government to be critically dependent on Independents (9), and single member outfits such as AUDF, BVA, BPF, MDMK, NPF, SDF, SWP and VCK.
Courtesy_
http://economictimes.indiatimes.com
Posted by Selvam P at 2:13 PM No comments:

Pondicherry: Scaffolds come up despite ban

Scaffolds come up despite ban

A long scaffold being put up in Pondicherry on Sunday to display banners.

PUDUCHERRY: In the last two to three days, a large number of temporary scaffolds have come up in several parts of the town to display banners.

The scaffolds, some of them made with woods and others with iron rods, have come up at a time when there is a ban on display of posters, hoardings and flexi hoardings in the entire Union Territory with effect from February 2009.

To the dismay of the public, a number of such scaffolds have been constructed on pavements and some of them even on the roadside, causing inconvenience to road-users.

These banners have been put up by supporters of prominent politicians in the Union Territory as part of the birthday celebrations of their leaders.

A few hoardings came up on Sunday on either side of Anna Salai, one of the main arterial roads, to welcome a Union Minister, who was in the town to attend two government functions.

Ever since the ban was imposed, it has been violated, especially by political parties.

Whenever there is a birthday celebration or a political function, banners of mammoth size are put up at every nook and corner of the town.

When brought to the notice of a leader about display of hoardings when there is a ban, he said: "We cannot resist the wish of supporters, especially when elections are round the corner."