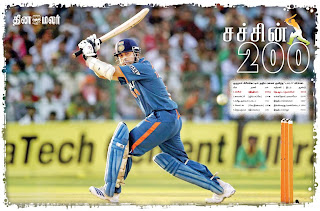 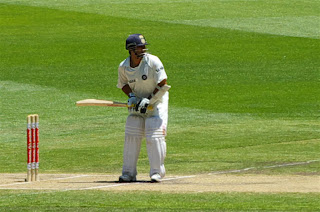 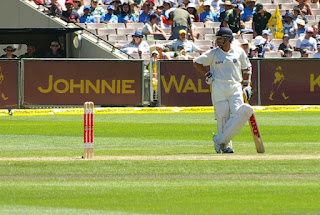 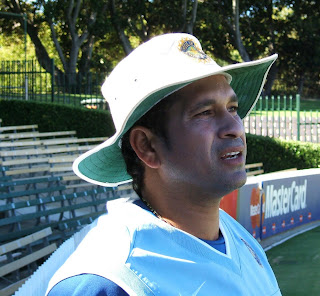 Also read the related stories in THE HINDU as follows:

EPIC EFFORT:Sachin Tendulkar, who delighted with bold brush strokes of genius on the canvas — the colours celebrating batsmanship, showed he still is an explosive athlete; he still has the eye of the tiger.

Gwalior: His heart larger than frame, Sachin Tendulkar lifted his arms in triumph. At 36, he had become the first man to conjure a double hundred in One-Day Internationals.

The maestro's unbeaten 200 was an epic effort of focus, flair and dare. His passion for the golden Indian crest undiminished, the little big man oozed character after India elected to bat and ran up a mammoth 401 for three — its highest score against South Africa — on a belter at the Roop Singh Stadium.

In the process, he delighted with bold brush strokes of genius on the canvas; the colours celebrated batsmanship. He still is an explosive athlete; he still has the eye of the tiger.

Man-of-the-Match Tendulkar's spirit-lifting effort proved a match-winning one. South Africa wilted under the pressure of a big chase to go down by 153 runs. With a match remaining, India has taken a winning 2-0 lead in the series.

A.B. de Villers, using his feet well, working the ball around and finding the gaps, made a defiant unbeaten 114, but South Africa was in with little chance. To make matters worse for the visitors, the ball kept a shade low under the lights.

Tendulkar's world record double hundred was yet another landmark for the champion in a career of miles and milestones.

The pavilion at the Roop Singh Stadium here will be named after him. A road in the city will also bear the maestro's name shortly.

Tendulkar added, "I do not play for records. I enjoy my cricket and I play with passion. I have done this for 20 years.''

The legend said he had struck a purple patch since the 2007 World Cup.

Asked about his record-breaking double hundred, he said, "I realised I had a chance when I got to 180 with so many overs left.''

On being at 199 at the start of the final over, he said, "I knew I would get my chance in the over. I will remember this innings. But I will not compare it with my other efforts. Each innings is different, the circumstances are different.

"No record is unbreakable. But I would be happy if an Indian breaks my record.'' He gave credit to Dinesh Karthik, Yusuf Pathan and M.S. Dhoni for their efforts. "Yusuf and Dhoni, in particular, played some very big shots.''

Earlier, the atmosphere inside the stadium was electrifying as Tendulkar glided paceman Charl Langveldt to squarish third-man off the third ball of the 50th over and scampered for a single for his 200th run.

The crowd erupted, non-striker Dhoni and the South Africans walked up to congratulate the legend, and his teammates in the pavilion were up on their feet.

Soon, Tendulkar, undefeated, walked back to a standing ovation. His monumental double century (200, 147b, 25x4, 3x6) was his 46th ODI century. Opening the innings, he had batted through the 50 overs. Tendulkar's commitment shone through in the manner he ran between the wickets. He also batted through pain.

The hectic brace in the 47th over – third ball – when he worked left-arm paceman Wayne Parnell behind square and completed two enabled him to go past the previous highest ODI score – 194 by Pakistan's Saeed Anwar and Charles Coventry of Zimbabwe.

Tendulkar, his sights set on a historic double century, was restrained in his celebrations, attending to his right hamstring even as Dhoni and Mark Boucher greeted his achievement.

The Indian innings also featured a busy 79 (85b, 4x4, 3x6) of crisp hitting by Dinesh Karthik – he added 194 for the second wicket with Tendulkar. Also a power-packed 23-ball 36 from Yusuf Pathan, in the batting Power Play overs between 35 and 39 South Africa conceded 63, and a brutal 68 not out (35b, 7x4, 4x6) by Dhoni. The Indian captain bludgeoned the South African pacemen with wristy blows of immense power.

The astonishing afternoon, however, belonged to Tendulkar. He was light on his feet and heavy with his shots. His batsmanship does have an ethereal quality about it.

It is also timeless; the ease with which Tendulkar rolls back the years is remarkable.

The maestro's symphony in front of a delirious crowd here had some captivating notes. His mind and body in harmony, Tendulkar cover-drove Parnell to the fence. Nobody moved as the ball struck the boards. The outfield was fast, Tendulkar's timing made it appear quicker.

The feature of his batting has always been his ability to pick the length in a jiffy. He, thus, is decisive as he ventures into a front-foot drive or punches, cuts or pulls off his back-foot.

When Steyn bounced at Tendulkar, he was pulled fiercely. Tendulkar was meeting fire with fire.

All the aspects were in order - a still head, a high left-elbow, and a lovely extension of the willow - as he off-drove Parnell. Tendulkar's batting is underlined by perfect balance.

I never played cricket for records, it happened: Sachin Tendulkar

Gwalior: After scoring the only double hundred in the history of one-day cricket, Sachin Tendulkar was the man of the moment. Excerpts from the media interaction.

What is your next target after having broken almost all records?

I don't play for records. I play for enjoyment and passion. I never came to cricket to make records. It just happened.

Where would you rate this innings? Is it the best?

I don't like to compare innings. But if an innings like this comes in a winning cause, it becomes a special one.

Who do you dedicate this double ton to?

I dedicate it to all my countrymen.

You have been awarded by the state government on this performance. Your take on that...

I respect the emotions showed by the people of my country. Their good wishes are important for me.

Could you please explain the phase that you are passing through in the last one year?

I enjoy challenges. In the last one year, I have come across some of those and enjoyed those. The credit goes to Gary (Kirsten). He held the team together. Sometimes I have seen him working harder than us and that is what motivates us.

Was the pitch of great support?

Sometimes the pitch helps the batsmen and some times it helps the bowlers. But you have to know how to use to the conditions to your favour.

Did you expect the score to reach 400?

After crossing 150, I was expecting a score around 350-360. But Yusuf Pathan and Mahendra Singh Dhoni played fantastic shots to take it over 400.

What were you thinking when you were at 199?

I needed one chance to get the run. But for me, team score was important and so I wanted Dhoni to take more of the strike as he was hitting the ball quite well. I knew the opportunity would come

Did you ever think that SA would have chased down such a target?

This is the team which scored 434 and so we had a discussion in the field and knew that the job was only half done. But the second half of the match was important. Our strategy was to pick up wickets at regular intervals.

It has taken 40 years to score a 200 in ODI. How long do you think this record will be unbroken? 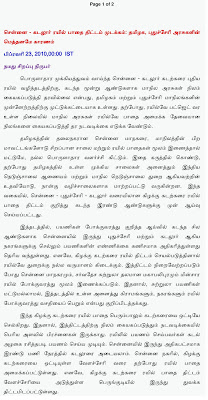 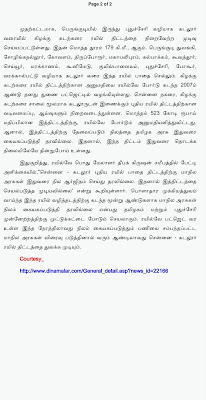 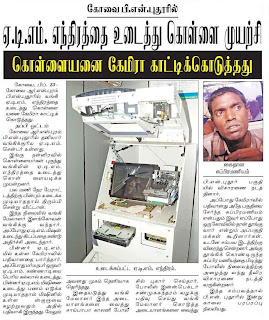 AIADMK whip seeks disqualification of 2 'rebel' party MLAs
Chennai | Monday, Feb 22 2010 IST
The Opposition AIADMK today sought the disqualification of two of its "Rebel" MLAs L Radhakrishnan and K Rajendran for participating in the General Council meeting of the ruling DMK.
In separate petitions to Tamil Nadu Assembly Speaker R Avudaiyappan, AIADMK whip K A Sengottaiyan said the two MLAs, who were elected on AIADMK tickets from Kovilpatti and Jayankondam Assemly constituencies, should be disqualified for defecting to the DMK. He said the two should be disqualified under the provisions of the 10th Schedule of the Constitution read with Rule 6 of the Members of the Tamil Nadu Legislative Assembly (Disqualification on Ground of Defection) Rules, 1986.
He charged that by participating in the DMK General Council meeting and meeting the Chief Minister, they had voluntarily given up the membership of the political party, which had set him up as a candidate.
''With effect from February 20, both the MLAs suffer disqualification by their continuous activities outside the House wherein by their conduct, they have voluntarily given up the membership of the AIADMK which had put them up as the party candidates'', he pointed out. Mr Sengottaiyan said by participating in the DMK's General Council as a General Council Member of that party, the MLAs by their conduct were subject to disqualification in terms of Para 2 (1) (a) of the Tenth Schedule of the Constitution.
He said both the MLAs had joined the DMK by participating in the General Council meting though they were elected as members of the AIADMK.
The two MLAs along with another MLA S Ve Sekhar, who turned a rebel and was expelled from the AIADMK, attended the DMK General Council as a Special invitees.
-- (UNI) --

Courtesy_
http://news.webindia123.com
Posted by Selvam P at 9:06 PM No comments: