CHENNAI: Chief Minister M. Karunanidhi on Monday inaugurated the ‘108’ emergency services in the State at the Secretariat.

Like the 911 emergency response system in the United States, anyone can dial 108, the toll-free number, and access emergency services. It is being operated on a public-private partnership model.

On receipt of information, the emergency response centre will send an ambulance (in the event of a medical emergency) or convey the information to the Fire Department or the police (in case of other emergencies).

The emergency response centre physicians and the emergency medical technicians in the ambulance will provide free pre-hospital care while transporting the victim to the nearest hospital of the patient’s choice. The system will be run by Emergency Management and Research Institute (EMRI), set up with initial funding from Satyam Computer Services founder and chairman B. Ramalinga Raju. The State government and the EMRI signed a Memorandum of Understanding in May. In four months, the system was made operational.

The Chief Minister flagged off the first 20 ambulances. It will provide a total of 198 ambulances. By 2010, the Sate will have a fleet of 600 state-of-the-art ambulances, equipped with emergency equipment ranging from defibrillators and ventilators, to extrication tools to handle any emergency. The ambulances will also have GPS and GIS equipment.

Pointing out that the West had ambulance-helicopters and advanced equipment to handle emergencies, Mr. Karunanidhi said the services were of utmost importance to save lives. EMRI had taken the initiative here, he said and commended those who had worked to set up the services in the State. Special Secretary, Health, P.W.C. Davidar, said that emergency treatment would be provided free for the first 24 hours to the victim. As many as 105 hospitals had signed up for this in Chennai. Five hospitals in Coimbatore and 50 in Madurai had signed up, too. 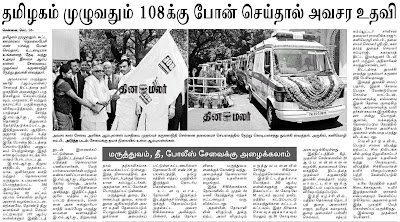